Your final score is based on ducks hit or missed and the number of questions answered correctly.
CHANGE
TOPIC
PLAY
CURRENT TOPIC
People - appearance
GAME OVER
PLAY
again
CHANGE
game
do
TEST
loading

About the DUCK SHOOT game

DUCK SHOOT is a fun game to learn French where you attempt to knock over all the fairground ducks in each level. In the first level there are only 6 ducks but by level 10 there are 24 fast moving quackers quacking. 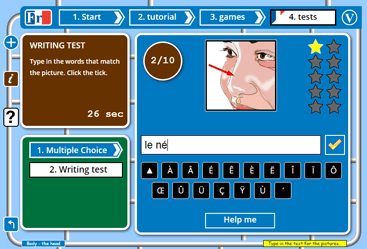 Test your French writing skills with our writing test..

After each level, win an additional 20 points by correctly answering a French question from your selected topic. There is no timer in this game: take as long as you like to answer the French questions correctly for a best score to get you on the DUCK SHOOT leaderboard.

How to play DUCK SHOOT to learn
Describe people in French